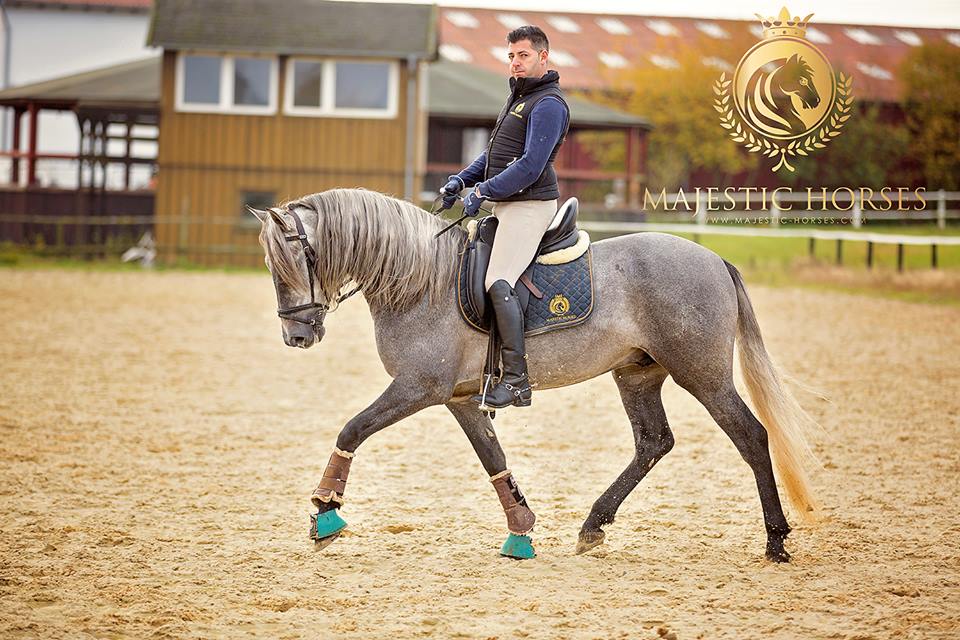 Spanish horses - a breed with elegance and charisma

Spanish horses are often admired for their enormous expressiveness, which they express particularly in dressage lessons. But also the above-average willingness to perform, their intelligence and good character are responsible for the fact that the Spanish horses are just as popular in professional sports and high dressage as they are for recreational riders who are looking for a dependable and reliable leisure partner.

Often the Spanish horses can also be found under the term " Iberian horses " - especially if the Portuguese Lusitanos are to be mentioned. But regardless: the Iberian and Spanish horses originally share the same pedigree. The first pictures of the prehistoric ancestors of Spanish horses can be found in the caves of La Pileta near Malaga. These cave paintings date back to 20,000 BC. Dated BC. These were later influenced by other horse breeds, especially the Arabian horse and Berber horses.

Riding Spanish or Iberian - what is it anyway?

Basically, the Spanish horses can be used in a variety of ways. Nevertheless, they clearly have their focus and advantages, which, with the appropriate support and potential of the rider and horse, can lead to top performances in tournament and dressage sports. Often influenced by the spectacular shows and tests, many riders choose the Spanish way of riding and contact us because they want to know where and how they can learn the Spanish way of riding best. Well, "the" Spanish way of riding does not exist, so to speak. So you don't have to go to a Spanish or specialized trainer. If you are a leisure rider, make sure that you have good basic training as with any other horse breed and choose a saddle that suits you and your horse.

The goal is the released Spanish horse, which can gather or strengthen depending on the level of training in the gaits.

The serenity of the Spanish horse is the first and most important goal. Letting go affect the rhythm, execution of gaits and all other components of dressage such as leaning, straightening, swing and assembly. The steady leaning that follows the rider's hand should be sought by the horse and not forced by the hand. As with other horse breeds, the same applies to the Spanish horse: with correct riding and training, the horse does not lean on the reins, which puts enormous weight in the rider's hands. Although the Spanish horses generally learn very quickly and motivated, it has been shown that these, like other breeds, lead to rudeness and resistance if the trainer or rider is forced too quickly and impatience. So first of all, letting go should be trained.

If there are already problems with your Spanish horse or you want to prevent them, Majestic Horses will be happy to take on the horse riding with experienced riders who have specialized in the training of Spanish horses.

Classic dressage or Doma Classica, as Spaniards call it, looks extremely elegant on an Iberian or Spanish horse like PRE or Andalusian - especially if they are trained regularly and correctly.

The typical exterior, the high willingness to assemble and natural alignment ensure that the rider has a particularly relaxed fit. Due to the easier alignment of the rider, the rider can concentrate better on the help. As soon as the horse and rider are sufficiently trained, the focus on special riding styles is also possible with the Spanish horse.

The highest level of dressage training is possible with Spanish horses. The prerequisite for maximum assembly of the classic lessons are traversals, side aisles, passage, piaffe, the flying change and the Spanish step / trot. As preparation for the high school like at the Riding School in Vienna and well-known Spanish riding schools in Jerez, which focus almost exclusively on Iberian horses such as Lusitanos, Lipizzaner, Andalusier and PRE.